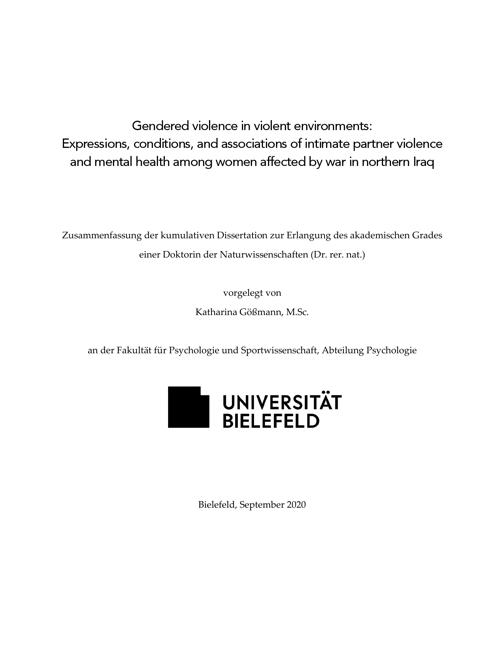 The present thesis explored the occurrence and conditions of violence against women in contexts shaped by violence by investigating forms and expressions of intimate partner violence and its associations with mental health. Incidents of sexual and gender-based violence against women in numerous forms have been reported from many war-torn countries across the world (Alsaba & Kapilashrami, 2016; Buckley-Zistel, Krause, & Loeper, 2014; Freedman, 2016; Nawyn, Reosti, & Gjokaj, 2009). An increasing body of research also indicates violence against women in partnerships to be prevalent in contexts of conflict and displacement (Stark & Ager, 2011). The impacts of violent experiences within family and partnership settings have long been described as detrimental on various levels including for mental health in terms of posttraumatic stress disorder (PTSD) and depression (J. C. Campbell, 2002; Ellsberg & Emmelin, 2014; Ellsberg, Jansen, Heise, Watts, & García-Moreno, 2008; Sugg, 2015). Conflict-focused research suggests that those forms of violence often persist and may play a great part in the health status of individuals who experienced displacement (Annan & Brier, 2010; Guruge et al., 2017; Hossain et al., 2014; Rees, Thorpe, Tol, Fonseca, & Silove, 2015; Stark & Ager, 2011; Vinck & Pham, 2013). The investigation of male-perpetrated intimate partner violence and its circumstances in the current war-related displacement context of the Middle East can thus help to provide important information on the partnership and family life of displaced people and provide insights for adequately tailored violence and mental health interventions for this population. Therefore, the present dissertation project aimed to examine experiences of violence against women, conflict-related violent events, and psychopathology among Iraqi and Syrian women who reside in displacement camps in northern Iraq. Three aspects of intimate partner violence against women are at the focus of this research project: its contextual assessment, its associations with mental health, and factors driving its perpetration. The three included studies that represent the core of this thesis each investigate one of these three aspects and together they aim to increase the understanding of violent partnership dynamics within severely violence-affected settings through the example of couples living in displacement camps in northern Iraq.

The aim of the first study was to address the lack of contextually valid instruments for the assessment of intimate partner violence. The study aimed to develop a contextually relevant and appropriate assessment instrument for Middle Eastern displacement environments and to measure the prevalence of violence in partnerships among a sample of displaced Syrian and Iraqi women. Despite comparatively high prevalence rates, the Middle East is among the regions for which very few validated instruments for partnership violence exist. Using a participatory approach including focus group discussions with women of the communities and expert panels, this study was able to create the Gendered Violence in Partnerships Scale (GVPS), an 18-item checklist that is reflective of the women’s living situations and that presents a new typology of violent acts in partnerships, which met psychometric criteria. The study found high levels of partner violence, PTSD, and depression among the participating women. In line with existing research on mental health impacts of partnership violence (Ellsberg & Emmelin, 2014), we found significant correlations of intimate partner violence exposure with measures of depression and PTSD symptomatology, which adds to the literature by showing the impacts of violence against women in settings with severe social and political strains.

The second study investigated the role of gender-based violence for mental health impairment in a context of war atrocities. Focusing on women of the Yazidi minority in northern Iraq, this study found high levels of self-reported psychopathology (PTSD and depression symptoms) and experiences of war-related violence and gender-based violence, both in terms of partner violence and violence experienced in captivity by Islamic State terrorists. Multivariate hierarchical regression analyses showed that the women’s psychopathology symptoms were associated with exposure to war-related events as well as with gender-based violence in captivity and with partner violence, the latter adding significantly to the variances explained by the regression models. The findings of this study replicate well-known associations of mental health with war-related violent experiences, and, additionally, show the significant role that gender-based violence in partnerships can play in the impairment of mental health in war-affected women (Usta, Farver, & Zein, 2008). The study adds to the growing number of reports on the situation of those who survived the cruelties by the Islamic State group in Iraq and Syria. It highlights the myriad ways in which Yazidi women have been suffering within the ongoing conflicts in the region. This calls for comprehensive support and interventions recognizing that psychopathology in women war survivors cannot be solely attributed to events that happened due to war and atrocities in the past, but might be related to ongoing interpersonal forms of violence as well, to which women are particularly vulnerable.

As perpetration of intimate partner violence is known to be associated with several personal factors including war-related trauma and gender attitudes (Devries, Mak, Bacchus, et al., 2013; Fulu, Jewkes, Roselli, & García-Moreno, 2013), the third study aimed to investigate the relationship and interaction of such factors among war-affected Iraqi couples to determine starting points for potential preventive and interventive approaches. Using a dual-informant survey conducted with a sample of Iraqi couples in a displacement camp in the Kurdistan Region of Iraq, the study was able to determine significant associations between men’s self-reported mental health (PTSD and depression) and gender attitudes with intimate partner violence experienced and reported by their wives. The prevalence of past-year exposure to partner violence found in this sample was over 58%. Moderating effects of the associated variables were determined by multivariate regression analysis, suggesting that higher psychopathology levels and inequitable gender attitudes in men interact in the prediction of male-perpetrated partner violence. This study indicates high prevalence of partner violence among displaced Iraqi couples and gives hints to possible contributing factors to violence against women perpetrated by men in contexts of highly strained social relations. The interaction of these factors underlines the importance of addressing both mental health issues and gender attitudes in any efforts aiming to end violence against women in (post-)war settings.

Overall, the findings presented in this dissertation thesis expand the existing research on partner violence against women in war and displacement settings through the example of Syrians and Iraqis residing in camps in the conflict-torn Kurdish regions of northern Iraq. This thesis thus contributes to our understanding of associated conditions, consequences, and opportunities to prevent violence as an ongoing burden for women in these contexts and beyond. From our findings, valuable implications for intervention efforts in humanitarian settings can be derived, emphasizing the relevance of mental health issues and ongoing forms of violence within the adversities of a post-war setting. Intervention approaches that target both previous violent experiences and current family and partnership conditions seem crucial to improve the situations of people who have experienced numerous war atrocities and loss and, in the long run, to allow rebuilding of stability in war-torn societies. Further, by underlining the gendered facets of structurally violent settings, the findings provide contributions and relevant reference points for future theoretical and practical research efforts regarding occurrence and transmissions of violence against women in contexts shaped by a myriad of violent experiences and perpetrations.