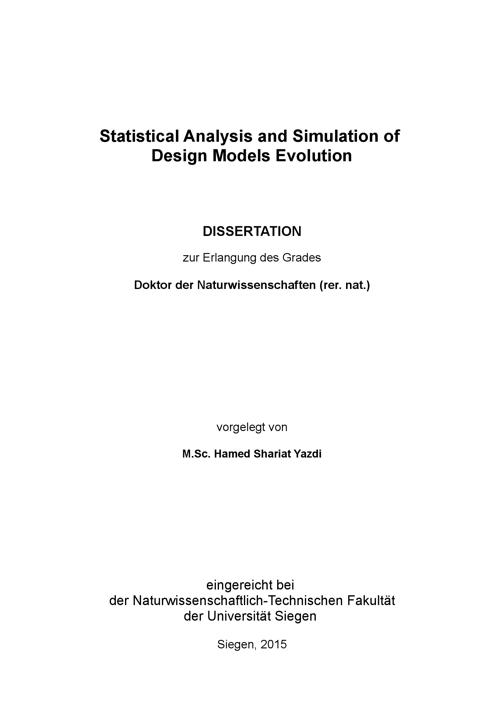 Tools, algorithms and methods in the context of

Model-Driven Engineering (MDE) have to be assessed,

evaluated and tested with regard to different aspects

such as correctness, quality, scalability and efficiency.

available and those which are accessible often lack

Therefore, one needs to resort to artificially generated

Many services and features of model versioning systems are

motivated from the collaborative development paradigm.

Testing such services does not require single models, but

rather pairs of models, one being derived from the other

one by applying a known sequence of edit steps.

The edit operations used to modify the models should be

the same as in usual development

Existing model generators are motivated from the

they do not consider the true nature of evolution

in which models are evolved through iterative editing steps.

They provide no or very little control over the

generation process and they can generate only single models

rather than model histories.

Moreover, the generation of stochastic and other properties

of interest also are not supported in the existing approaches.

application of edit operations does not yield useful models,

since the generated models are not (stochastically) realistic

and do not reflect true properties of evolution in real software

Unfortunately, little is known about how models of

real software systems evolve over time, what are the properties

and characteristics of evolution, how one can mathematically formulate

the evolution and simulate it.

To address the previous problems, we introduce a new general

test models for model differencing tools and tools for analyzing

We propose a model generator which addresses

the above deficiencies and generates or modifies models by

are devised and the generator supports stochastic and other

properties of interest in the generated models.

Moreover, in our approach we provide a methodological framework for

Mathematically, the representation of evolution is based on

test models are discussed in detail.

As an application, the framework is applied to the evolution of design

In order to study the the evolution of design models,

we analyzed 9 major Java projects which have at least 100 revisions.

We reverse engineered the design models from the Java source code

and compared consecutive revisions of the design models.

The observed changes were expressed in terms of two

The first set consists of

of nodes and edges of the abstract syntax graph of the models.

The second set consists of

188 high-level (user-level) edit operations which are

more meaningful from a developer’s point of view and

low-level operations and is considered as one user action.

In our approach, we mathematically formulated the pairwise evolution,

In this regard, we initially considered many distributions

which could be promising in modeling the frequencies of the

Six distributions were very successful in modeling the changes

and able to model the evolution with very good rates of success.

To simulate the pairwise evolution, we studied random variate

generation algorithms of our successful distributions

For four of our distributions which no tailored algorithms

The comparative performance of the time series models for

handling the dynamics of evolution as well as accuracies of their

models are superior to other models.

Moreover, we discuss the simulation aspects of

The knowledge gained through statistical analysis

of the evolution was then used in our test model generator

in order to generate more realistic test models for