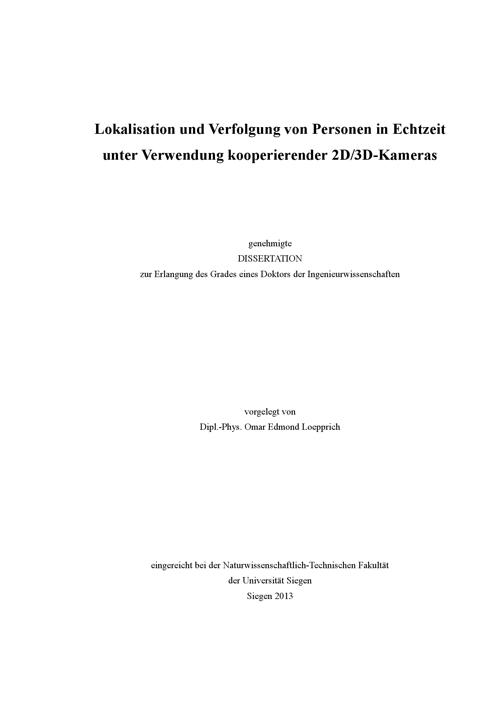 in the automated interpretation of actions within the monitored space. One premise therefore is the

ability to detect, localize, track and classify objects within the surveyed area

In terms of system design, it’s also crucial to incorporate the targeted application area. For the case

few objects are simultaneously present within the detection area, data from a single sensor might

be sufficient in order to infer adequate information. Increasing the area to be monitored and also

allowing multiple objects to dynamically interact in the space to be surveyed, usually leads to the

necessity to apply multiple distributed sensor systems which, in order to generate useful

information, have to work together in a cooperative manner.

detection, localization and classification is to utilize a combination of devices delivering 2D- and

3D-data. Depending on the requirement, fusion of the information is then done on pixel-, feature or decision-level. The combination of different systems in a 2D/3D-measurement device is not

trivial, though. In case of taking moving objects into account, there’s a necessity to provide an

adequate temporal synchronisation mechanism between the participating devices. With regard to

an effective fusion process, the process of registration of the acquired data needs also to be

applied. Furthermore, by combining multiple of such 2D/3D-devices into one all encompassing

system, the additional need for a coordinated management emerges. Having to cope with all of the

which in turn might result in an unacceptable overall system performance.

The at the Center for Sensorsystems (ZESS) developed MultiCam, an at the moment unique sensor

based distance information (3D) of a complete scene. Due to the monocular set-up, a drastic

simplification of the process of image registration of the 2D- and 3D-images is attained.

Furthermore, the internal logic, situated in an embedded FPGA, permits an accurate temporal

synchronisation of the different information streams. Due to the reduction of the overall

complexity of the processes of registration and temporal synchronisation of the 2D- and 3D-data, it

with, in comparison with conventional 2D/3D-systems, a drastic simplification in terms of

units enables to supervise an area up to a distance of maximal 9mat a camera frame rate of 20fps.

With similar ToF devices, the same distance range can only be achieved by an increase of the

sensor integration times and which in turn directly leads to a reduced frame rate. Furthermore, as a

result of the utilization of a lens with a focal length of 6mm, it is possible to monitor volumes in

which multiple persons can simultaneously be present and also interact with each other. Due to the

available temporal resolution, one can account for the dynamic behaviour of the objects

effectively. As a results of all of the aforementioned properties, the MultiCam is ideally suited for

the detection, localization, tracking and classification of objects in indoor areas.

Through the combination of multiple simultaneously operating MultiCams with different

orientations and partially overlapping field of views, it is possible to directly extend the surveyed

area and also reduce the amount of mutual object occlusion. This directly leads to the generation of

devices, an agent based system is utilized. Information delivering agents, composed of one

MultiCam with dedicated processing unit, are responsible for the direct processing of the acquired

raw sensor data. Based on their view onto the scene, they generate information in form of a local

status vector which they send to a dedicated fusion agent. This fusion agent is in turn responsible

for the combination of all of the local information received into one global status vector. Due to the mutual independence of the participating agents, parallel processing

the system in an easy manner.