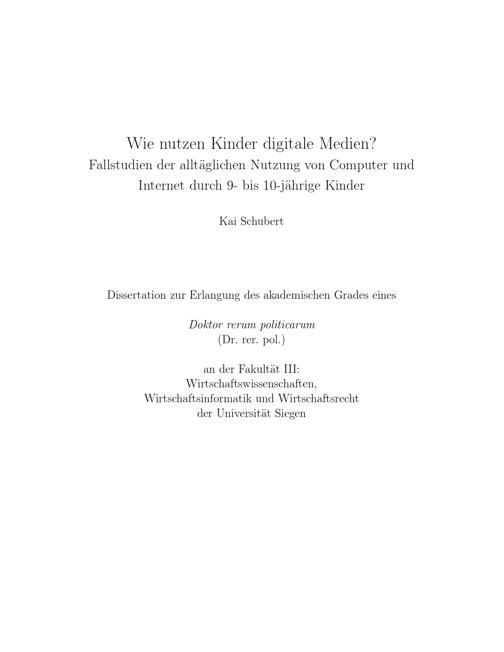 Children using computers has been a controversial subject from the outset.

Although public debate often argues about the effect of game consoles,

use are almost always based on exclusively quantitative paradigms. On the

other hand, differentiated analysis of the use and appropriation of

digital media by 9- and 10-year-old children in Germany is very scarce.

which have been collected and evaluated. The key questions in these

detailed case studies are composed of the following points: How, where and

media in their everyday lives? Which role do the various media worlds

(i.e. family, peer group, school and various other important people in the

children’s lives) play in the appropriation of digital media? How do

children use digital media compared to “classic”, “analogue” media? How do

children appropriate digital media? What is the difference between this

study follows an interdisciplinary research approach which, while

clarifying the afore mentioned key points, focuses on topics which are

research. The main focus hereby is on the use and appropriation of media,

not on their effects.

The study makes use of qualitative methods of social research, using tools

which include various types of interview and participatory observation.

One particularly important method is the so-called “interactive interview”

of the research field. As a kind of hybrid composed of already existing

methods, the interactive interview allows both better access to the field

as well as the elicitation of valid data. For the evaluation of the

elicited according to the grounded theory method, which allow for a

systematic description of the individual phenomena within the respective

case studies. A total of ten children formed the core of the case studies

and, of these, three were chosen for the development of the key

categories. The cases were subsequently contrasted with each other in

greater detail. The key categories were Children’s Media Use, Families’

The result is a clearly differentiated picture of the spectrum of

characterized by great diversity and is subject to constant change. In

everyday use, it is the respective media world by which the child is

currently surrounded which is of vital importance. Each media world

applies its own, different rules and the awareness of this plays an

important part in children’s socialization. Particular focus hereby is on

the role model effect of parental use of the diverse media. In addition to

the three existing media worlds of family, peer group and school, the

internet can be defined as a new, fourth media world: it influences all

the other media worlds and in most cases does not exist autonomously. At

the same time, the existing media worlds face up to the increasing

very different ways. In general, a new type of habitus can be observed

concerning the use of digital media in all media worlds. This “digital

habitus. On the contrary it is, in fact, rather to be seen as a new aspect

of these habitus: the initially playful use and secrecy concerning

passwords that protect personal privacy are typical features of digital

habitus. Additional attributes, e.g. strategies for the correction of

mistakes (by rebooting, or “starting again”) can be seen here as original

and provide an important link to a starting point for further studies. One

of the most important conclusions for computer science is that digital

media should be designed for and with children. This calls for a common

culture of use by children and their parents alike. One future challenge

as for schools themselves to focus intensively on games and social media.

Seen from a research methodological point of view, it would appear to be

eliciting, evaluating and publishing empirical data are being confronted

The PDF-Document has been downloaded 1 times.