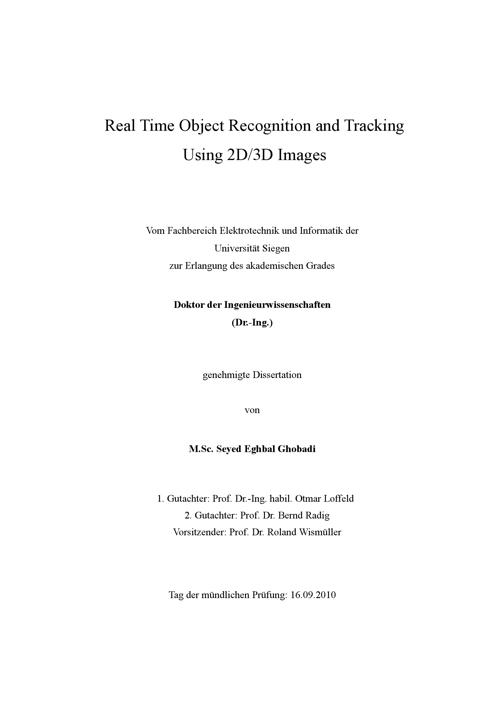 Object recognition and tracking are the main tasks in computer vision applications such as safety,

medical reasoning and many more. In all these applications the aim is to bring the visual perception

capabilities of the human being into the machines and computers.

represents some data about the color or intensity of the objects in the scene, the 3D denotes some

information about the position of the object surfaces. In fact, these aspects are two different modalities

Nowadays, the 3D vision systems based on Time of Flight (TOF), which fuse range measurements

with the imaging aspect at the hardware level, have become very attractive to be used in the

aforementioned applications. However, the main limitation of current TOF sensors is their low lateral

world problems. On the other hand, they do not provide any color information which is a significant

property of the visual data. Therefore, some efforts have currently been made to combine TOF cameras

with standard cameras in a binocular setup. Although, this solves the problem to some extent, it still

deals with some issues, such as complex camera synchronization, complicated and time consuming

2D/3D image calibration and registration, which make the final solution practically complex or even

infeasible for some applications.

On the other hand, the novel 2D/3D vision system, the so-called MultiCam, which has recently been

developed at Center for Sensor Systems (ZESS), combines a TOF-PMD sensor with a CMOS chip in a

recognition and tracking to find advantages and limitations of this new camera system. The core

contribution of this work is threefold:

In the first part of this work, the MultiCam is presented and some important issues such as

presented to enhance the quality of the range data. In this section, it is seen that due to the monocular

setup of the MultiCam, the calibration and registration of 2D/3D images obtained from the two sensors

is simply attainable [12]. Also, thanks to a common FPGA processing unit used in the MultiCam,

sensor synchronization, which is a crucial point in the multi-sensor systems, is possible. These are, in

fact, the vital points which make the MultiCam suitable for a vision based object recognition and

In the second part, the key point of this work is presented. In fact, by having both 2D and 3D image

modalities, obtained from the MultiCam, one can fuse the information from one modality with the

other one easily and fast. Therefore, one can take the advantages of both in order to make a fast,

reliable and robust object classification and tracking system. As an example, we observe that in the

real world problems, where the lighting conditions might not be adequate or the background is

cluttered, 3D range data are more reliable than 2D color images. On the other hand, in the cases where many small color features are required to detect an object, like in gesture recognition, the high resolution color data can be used to extract good features. Thus, we have found that a fast fusion of

promising results for real time object recognition and tracking. This is validated in different parts of

this work ranging from object segmentation to object tracking.

In the last part, the results of our work are utilized in two practical applications. In the first application,

cooperation with a robot. In the second application, an intuitive and natural interaction system between

the human and a robot is implemented. This is done by a 2D/3D hand gesture tracker and classifier

which is used as an interface to command the robot. These results validate the adequacy of the

MultiCam for real time object recognition and tracking at the indoor conditions.