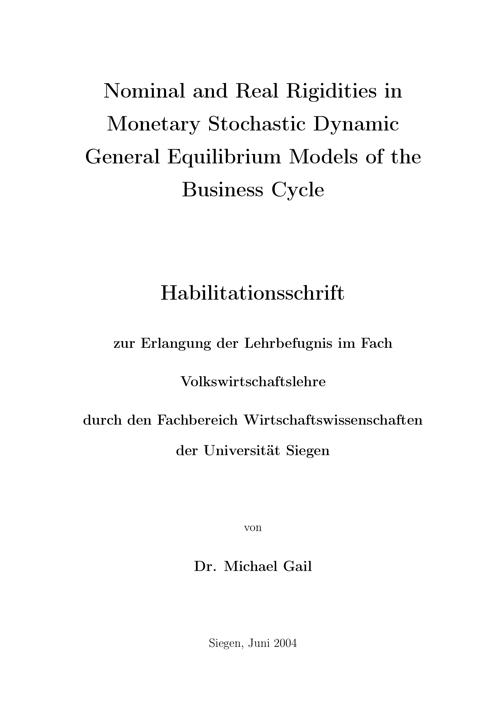 a common framework. I will concentrate on a quite simple model setup in order

to find out the important transmission mechanisms at work. The focus will be on

on interest rate shocks. The book contains five main chapters. All these chapters are presented in a way

that allows the reader to study them separately. Therefore the building blocks of

the models will be repeated in every chapter. The first four chapters are concerned

In Chapter 2 the basic model is presented. Prices are set in a staggered way

as in Taylor (1980). The chapter addresses two questions that have not yet been

answered in the literature. First: Is there a difference between money introduced

via a CIA-constraint or via a MIU-specification? Second: Does it matter how the

household’s preferences look like? The answers are yes in both cases. It turns out

the business cycle. Thus in Chapter 3 the MIU-setup as well as GHH preferences

will be discarded. But the model will be augmented by capital accumulation considerations.

The chapter considers instead the implications of the price setting scheme:

Taylor pricing is compared to Calvo pricing. It turns out that the failure of the basic

model to generate persistent output responses is due to Taylor type price staggering.

impulse responses, confirming the results of Kiley (2002) in a more general setup.

Chapter 4 considers the role of habits in consumption. While this feature has

already been analyzed by others, e.g. Christiano, Eichenbaum and Evans (2003),

isolation. In addition, related studies use Calvo pricing. Here the MIU-model with

can improve the model with respect to its ability to create persistence in output.

improved. For a high enough value of the habit persistence parameter consumption

can even be hump-shaped, as it is empirically (see Figure 1.4).

of price changes as in Rotemberg (1982). It turns out that this specific combination

is important to get persistent output responses to a money growth shock. When

not be persistent. Sticky prices through adjustment costs of prices operate similar

as sticky prices under Calvo pricing. When they interact with adjustment costs of

capital they can even strengthen the persistence in output. In the absence of the

costs for adjusting the capital stock there are only very moderate effects on output.

Chapter 6 goes a step further. Here the question is not whether a monetary

stabilize the price level as claimed by King and Wolman (1999). The analysis builds

upon the framework used before: the household maximizes life-time utility and firms

maximize profits. The central bank acts as a social planner that takes into account

the optimizing behavior of the household and the firms. Maximizing welfare is then

equivalent to maximizing utility of the representative household. It is shown that

in completely stabilizing the price level, as is also observed empirically. Chapter 7 summarizes the main findings and gives some suggestions for future research while Chapter 1 discusses briefly important advances in macroeconomic theory as well as in empirical methods to characterize the business cycle.