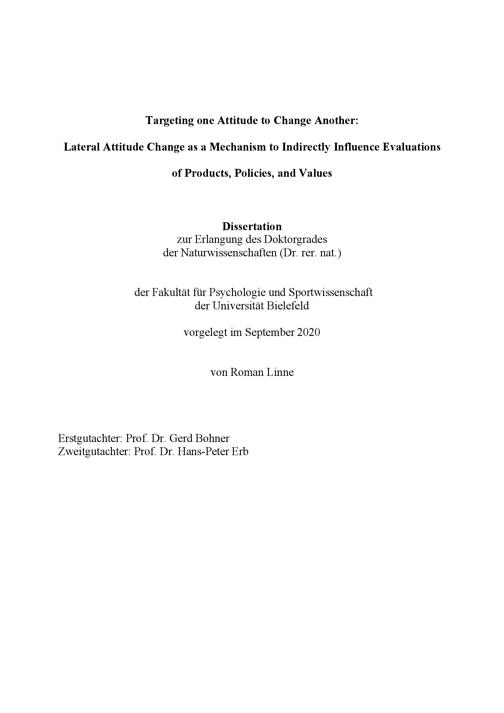 (=lateral) attitude change in general. Furthermore, I extended the LAC model and applied it to

values. Finally, I discuss the LAC model in its current state and put forward suggestions to

modify aspects of the model or overhaul the model entirely.

same set of assumptions regarding underlying processes. According to the LAC model, every

line with the influence attempt; this change in evaluation is subsequently transferred to related

(=lateral) topics may be propositionally affirmed. If associative attitude change is confirmed, the

result is generalization, that is, explicit attitude change toward the focal as well as toward lateral

According to LAC, there can also be attitude change toward lateral topics if focal attitude

attempt. Associative change to lateral objects may be affirmed, while invalidating information

would not be applied to the evaluation of lateral topics. This process is called displacement. The

hierarchy) that are assumed to moderate LAC.

In Part I of the present research, I was able to present evidence indicating that focal

attitude change toward products generalized to related yet unmentioned products as a function of similarity to the focal product. Furthermore, one experiment also returned tentative evidence in

favor of displacement effects as a result of discrediting a previously presented influence attempt.

of preference for consistency (PfC) were high. Whereas explicit data were generally in support of

In Part II, I tested LAC in another domain of attitude change: attitudes toward socially

relevant policies and values. Furthermore, I attempted to expand on the original concept of LAC

by introducing the process of lateral contrast, describing the notion of indirect effects of a

contradictory valence compared to focal effect. In Part II of this thesis I was able to show that

suggested stronger LAC when the focal object had been a value (vs. a policy) and thus was on a

higher (vs. lower) hierarchical level. In addition, I also found some evidence in favor of the

theorized lateral contrast, but results were not conclusive. In particular, questions regarding the

satisfactorily. In the final experiment I modelled populist influence as a process of LAC. A rightwing

regarding topics that had not been mentioned in its initial attempt at persuasion. A conservative

source elicited a similar effect, albeit with generally more success in changing participants’

In general, I found strong evidence in favor of explicit generalization and moderation by

similarity. Additionally, the data also returned some evidence in favor of LAC being moderated

by PfC and hierarchy. However, evidence for underlying implicit effects, displacement as

proposed by LAC, and lateral contrast was not as convincing.I discuss implications for the LAC model in its current state as well as potential revised

versions of specific aspects of LAC and make suggestions for a complete overhaul of the model.

change in general, there is not enough evidence to accept the LAC model as currently

conceptualized. However, some adjustments may allow it to fulfill the promise of being a

comprehensive model to explain different expressions of the everyday phenomenon that is lateral attitude change.