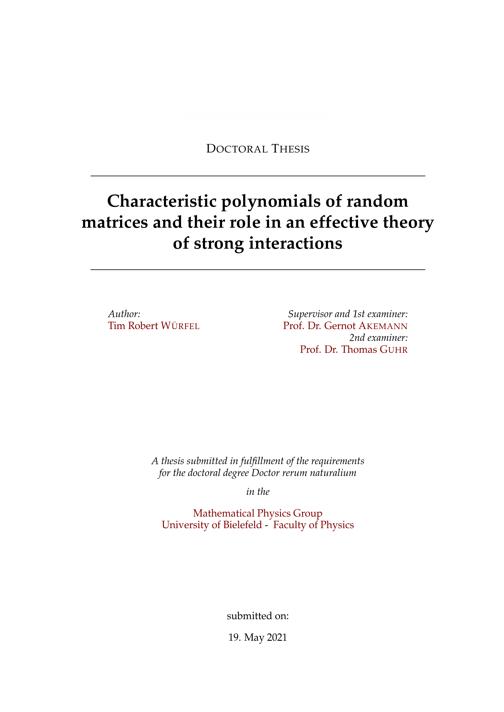 models of Quantum chromodynamics (QCD). The symmetries of the field theory lead

extensions thereof. The random matrix ensembles are comparable to the effective theory of

QCD in a low-energy regime, where chiral symmetry breaking is predominant and it suffices

to consider only the smallest eigenvalues of the QCD Dirac operator. We consider four

members of the chGUE(N) symmetry class: the classical chGUE(N) consisting of Hermitian,

parameters describing effects of external sources like temperature and its combination

with Nf massiv flavors. The correlations of the chGUE(N), and its extensions with external

parameters, als well as its deformations with massive flavors, belong the class of determinantal

point processes. This implies that correlation functions can be expressed as determinants

of a correlation kernel. The random matrix ensembles we consider feature special

polynomial ensembles. Such ensembles are characterised by a joint probability density

function (JPDF) containing two determinants, which can be linked to orthogonal polynomials,

an external source, the JPDF has biorthogonal structure and the usage of orthogonal polynomials

becomes more involved. in this case, the correlation kernel can be expressed in

terms of expectation values of ratios of characteristic polynomials. We will derive a multicontour-

kernel for the chGUE(N) matrix models including temperature as an external source. The

with supersymmetry and orthogonal polynomial methods. We show that the limiting

independent models. Furthermore, we show that the resulting correlation functions for

functions derived via supersymmetry. This answers the question wether the correlations of

the underlying physical field model are indeed universal in the low-energy regime, where