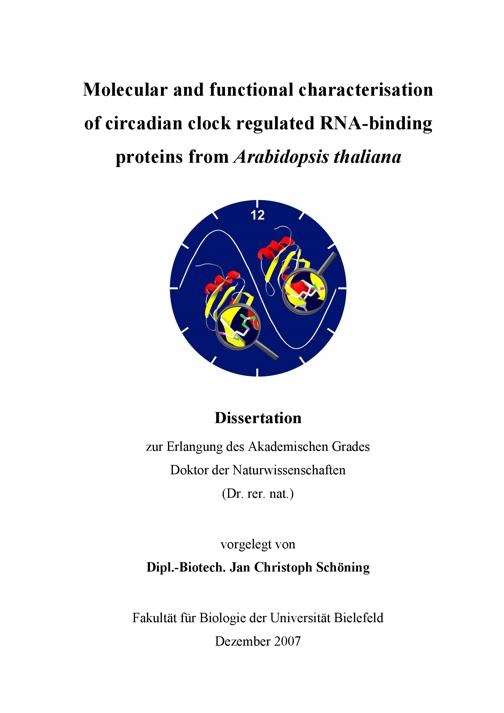 RNA-binding protein) influences its own circadian oscillations by negative autoregulation

at the post-transcriptional level, presumably by binding to its own transcript.

homologue AtGRP8 at a molecular level. Definite binding sites within the AtGRP7 and

has been demonstrated using synthetic oligoribonucleotides. Mutational analysis of the

RNA recognition motif (RRM), respectively, that are crucial for binding affinity and

specificity. Moreover, direct insights into the binding process have been obtained by the

establishment of single molecule techniques such as fluorescence correlation spectroscopy

regions for target recognition and has influence on the RNA secondary structure.

AtGRP7 and AtGRP8 share a number of downstream target transcripts. These findings

interdigitated feedback loop centred around AtGRP8. Furthermore, the relevance of the

AtGRP7 RNA-binding activity for its in vivo function has been demonstrated. Mutation of

a conserved RRM arginine (R49Q) leads to a severe reduction in binding affinity in vitro.

Overexpression of AtGRP7, but not AtGRP7-R49Q in transgenic Arabidopsis plants leads

to alternative splicing and concomitant decay of endogenous AtGRP7 transcript. This

AtGRP7 in vivo. This is the first example for an RNP1 mutation showing a direct

correlation of binding affinity in vitro and function in vivo.

rapidly. To address the mechanism of this rapid degradation upf1 and upf3 mutant plants

were analysed that are impaired in the nonsense-mediated decay (NMD) of RNAs. Indeed,

the alternative AtGRP splice forms are increased in the upf mutant plants, indicating a

previously unknown connection of the circadian clock and the NMD pathway.